Bali, the Most Magical Place on Earth

My story about Bali is a love story. A love story without a start or an end...

Don't know when or how this passion for the beautiful island began. All I know is as soon as I stepped foot on it, my heart spoke to me, and it knew way before I did, that I belonged there. Maybe it was something about the air, the energy, the people, who knows... but it felt familiar, it felt mystical. 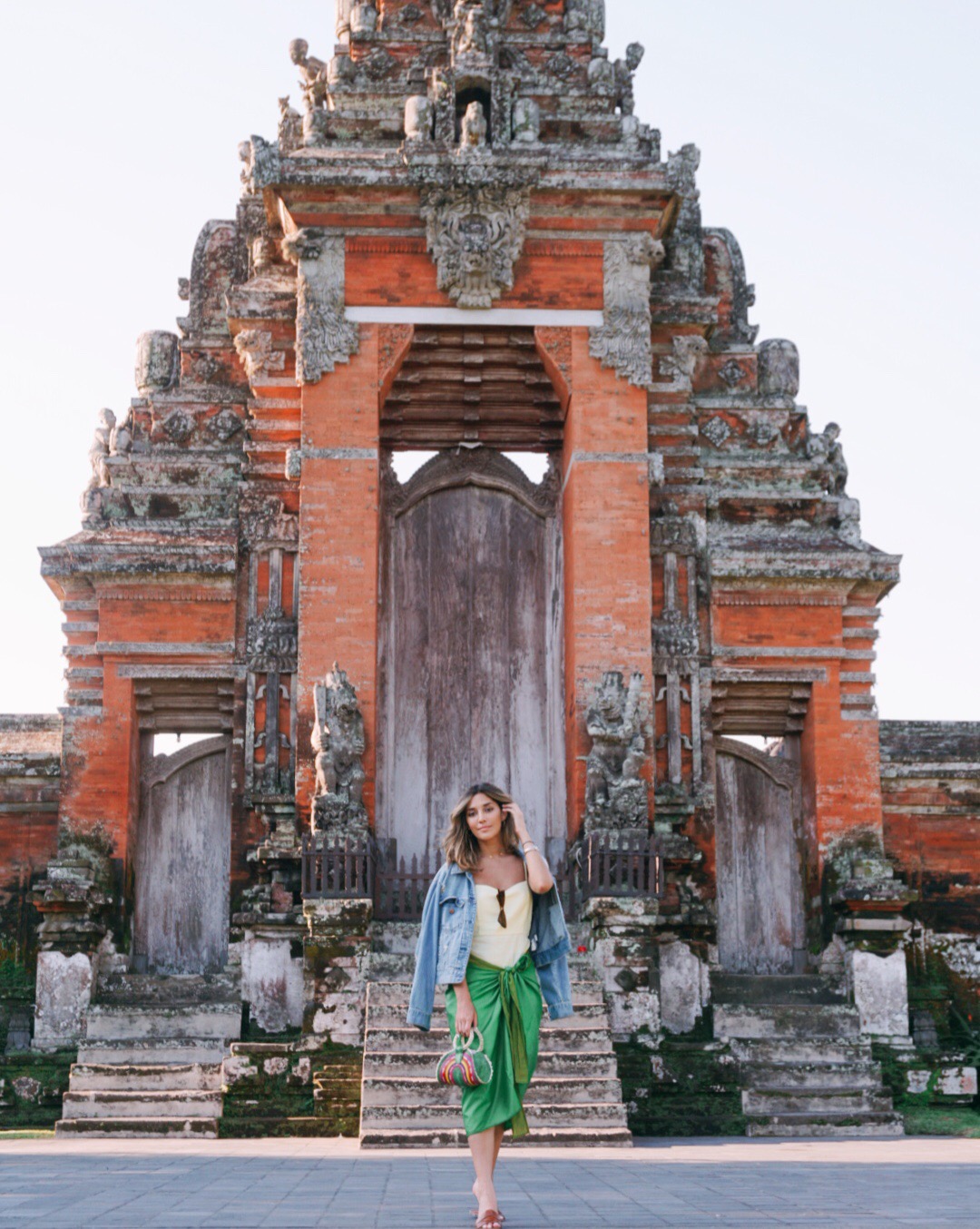 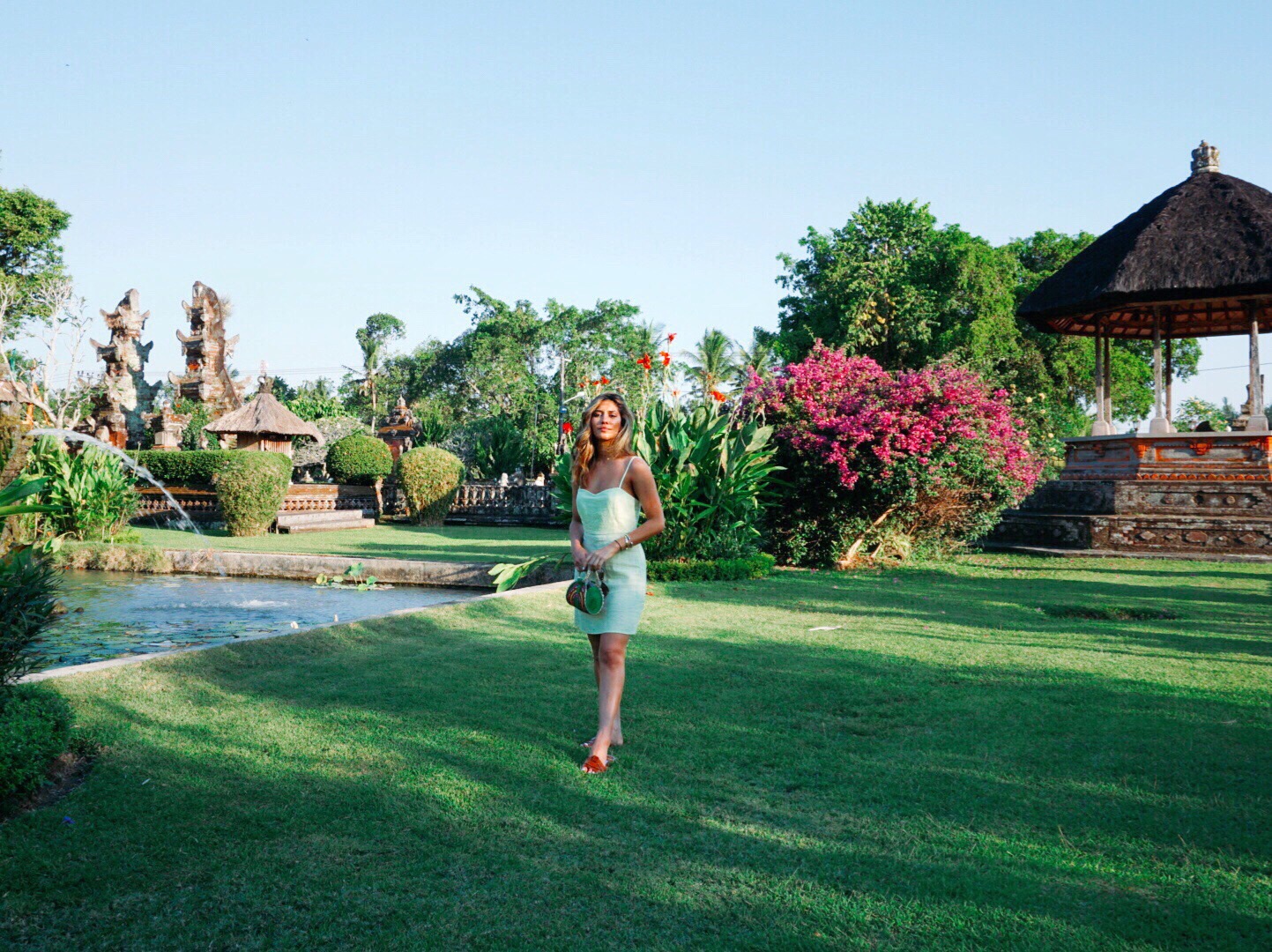 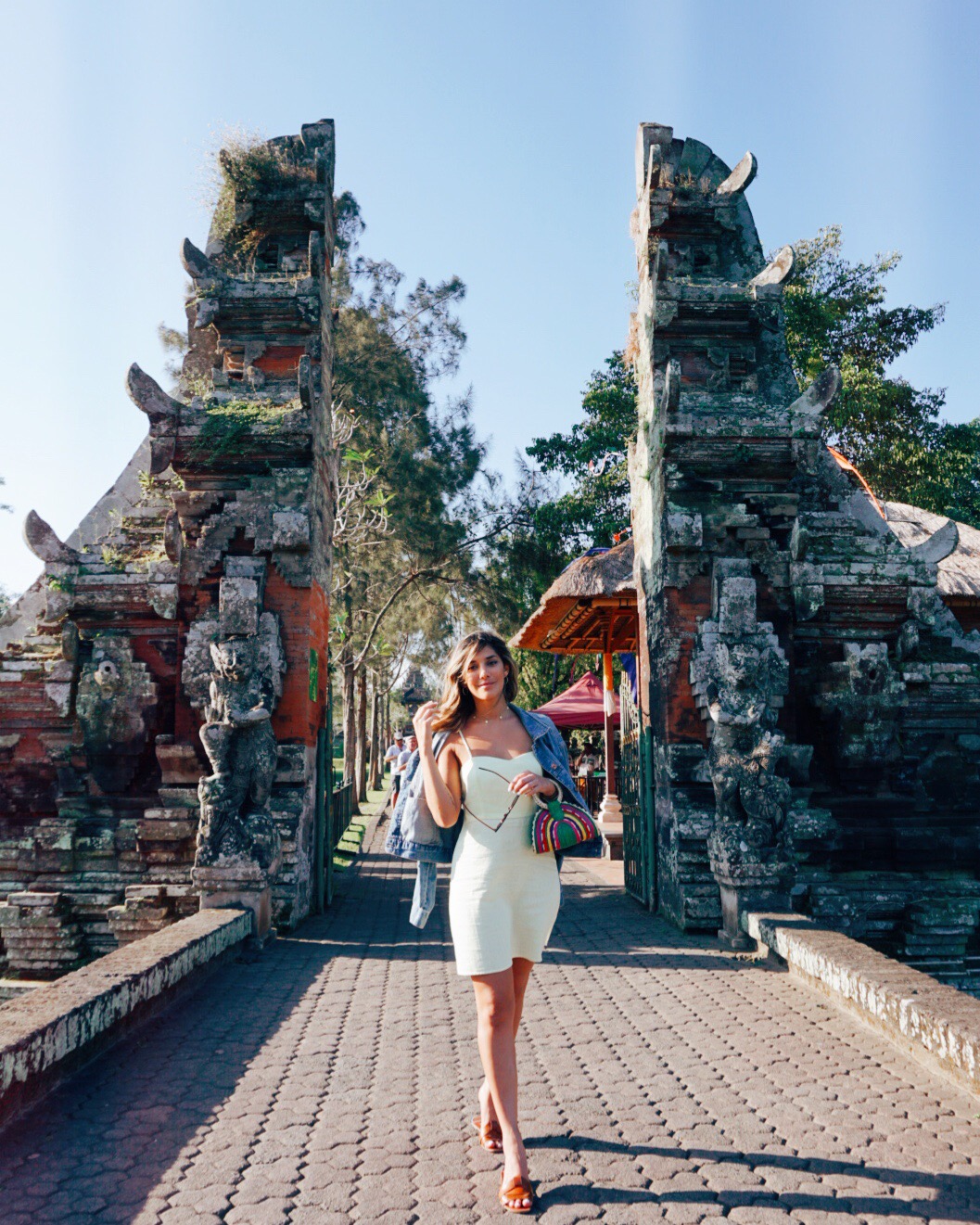 On my first day, I wanted to go to the Monkey Forest in Ubud, but given the time, and the major traffic jams caused by massive volumes of motorcycles, it was impossible. So my driver decided to take me somewhere closer to where I was staying in Canggu.

(BTW, you can get a driver there so easily and they will drive you almost everywhere and it only costs around $25. So worth it when you're solo-touring and you definitely don't want to hop on a moto with a complete stranger).

Off Putu, my driver, and I went to the closest temple (not counting the temples in the homes), the Taman Ayun Temple. It was so zen and ever so lovely.

Fun Fact: There are more than 50,000 temples all over Bali. This perhaps is why people call it the Island of the Gods.

The small island is a melting pot of religions like Hinduism, Muslim, Christianity and Buddhism. Don't you think it's admirable how all these different cultures and religions can co-exist in peace in one land?

Also, when you walk around in Bali, you see small squares or round palm leaves filled with colorful flowers lying on the ground either in front of temples or houses or even shops. They're everywhere. Those things called Canang Sari, daily Balinese offerings.

The phrase Canang Sari derives from the Balinese words sari, which means essence, and canang, which is a small palm-leaf basket they us as the tray. Canang Sari is the symbol of thankfulness to the Hindu god, Ida Sang Hyang Widhi Wasa. It is offered every day as a form of thanking the gods for the peace given to the world.

After a few days of local living, chilling by the pool, and helping my friend with her business, I booked a 2nd tour online to visit Ubud. The driver picked me up at 8:30 AM to avoid the unavoidable traffic and after what might have been 2 hours, we got to our destination. The Monkey Forest...*sigh* 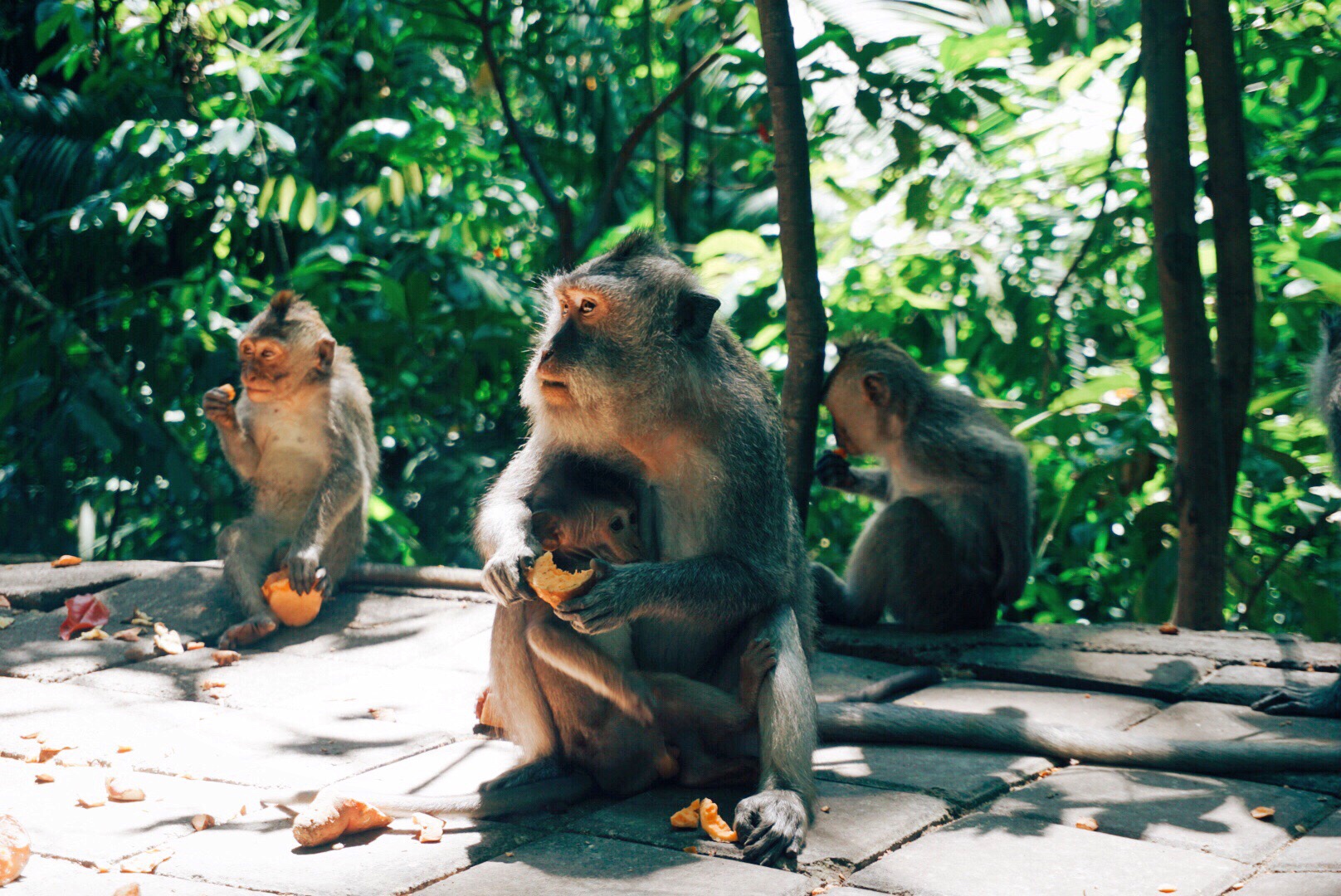 So, I had a really interesting experience when visiting my monkey friends. It just so happens, they aren't so friendly.

You know how they say "don't bring anything shiny or anything that can call the monkeys' attention..." Right. So...

As I was happily strolling through the forest, I suddenly feel a tug on my hand bag. When I look down, I discover a baby monkey hanging from it. At first, I was excited, gushing all over the baby monkey,and overall we were the center of attention for one hot second. After a while, I really just wanted to get going, so I tried to gently shake the monkey off my bag. However, the monkey didn't take it lightly and it started to scream. Of course, at this point, I panic and scream too, which made it even worse. My scream, rattled up two grownup ones near by and incited them to run. The target? My bag. Once I realized I was under attack, I was forced to run away until I realize that three monkeys we're chasing me and my bag. In a matter of seconds I had to make a decision, either run faster or turn around, stand my ground, be tougher than the monkeys, and scare them away. And that's what I did. Unfortunately, the monkey keeper didn't see my act of bravery positively so I opted for the nearest exit.

Lesson, don't bring your cute hand bag to a Monkey Forest unless you're looking to re-enact the scene where Hannah Montana and Tyra Banks end up wrestling over some shoes.

After that, Bagus, my driver for the day, took me to lunch at a nice restaurant overlooking the volcano. (Even the memories of this moment leave me breathless.) Following lunch, came the typical Balinese Cappuccino... or should I say Ca-Poo-ccino?

(If you don't understand the joke yet, hold on to your pants cause this sh!t is about to go down...)

The typical Balinese Cappuccino is so unique because the coffee beans are fermented for a while in the intestines of an animal called the Luwaq and after being defecated (yep, after being pooped out) with other fecal matter, they are collected.

I know what you're thinking, "that's so gross." Don't worry, there's a whole entire process that comes after. And the coffee is quite good actually; strong, but good.

Finally, the rice fields. This picture says it all :)

On day three of touring, my friends and I went to visit the elephants at the Elephant Safari Park & Lodge in Ubud!

At the Elephant Park, they had around 34 rescued elephants, 4 of which were born there. It was an amazing feeling to be so close to these magnificent creatures. 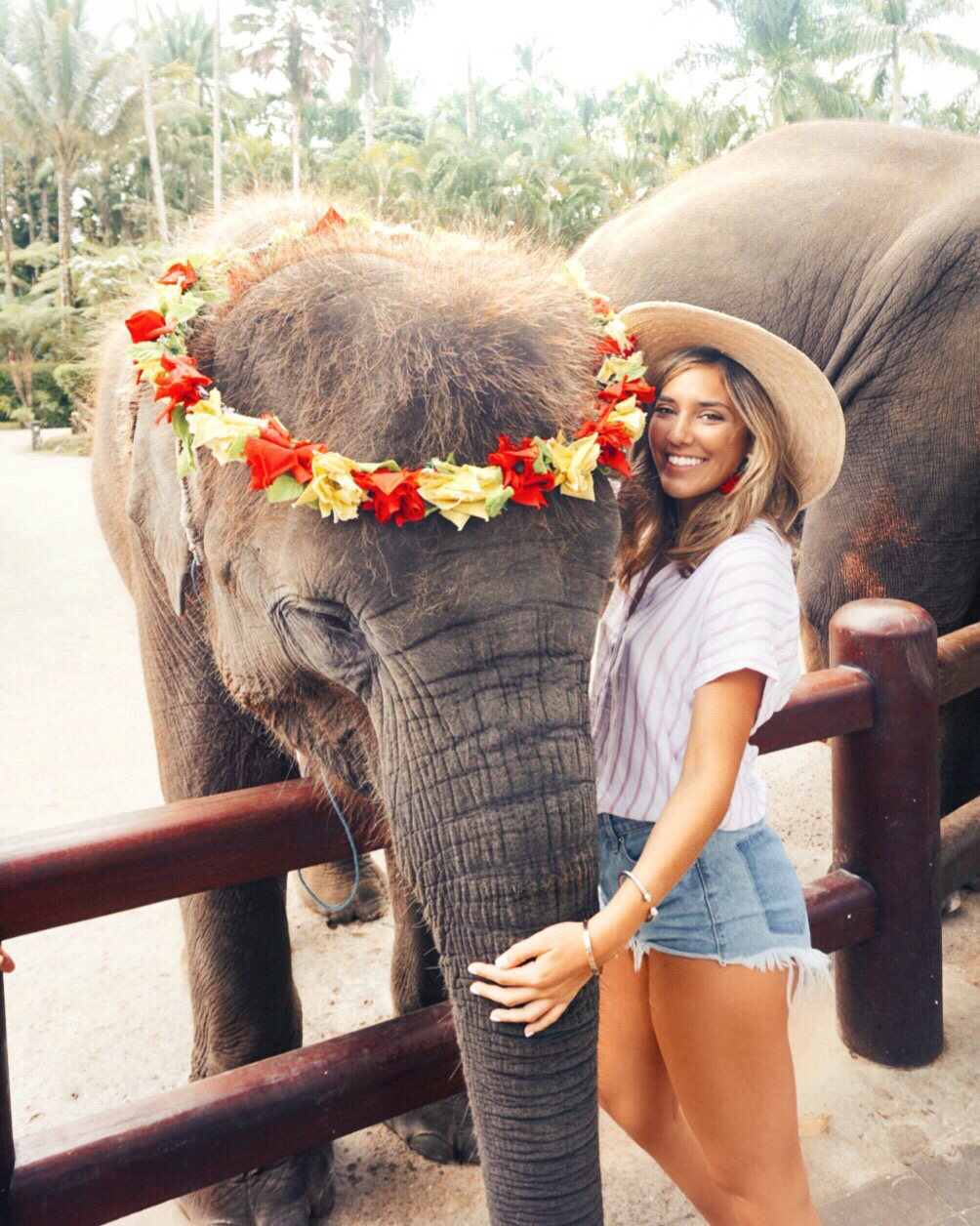 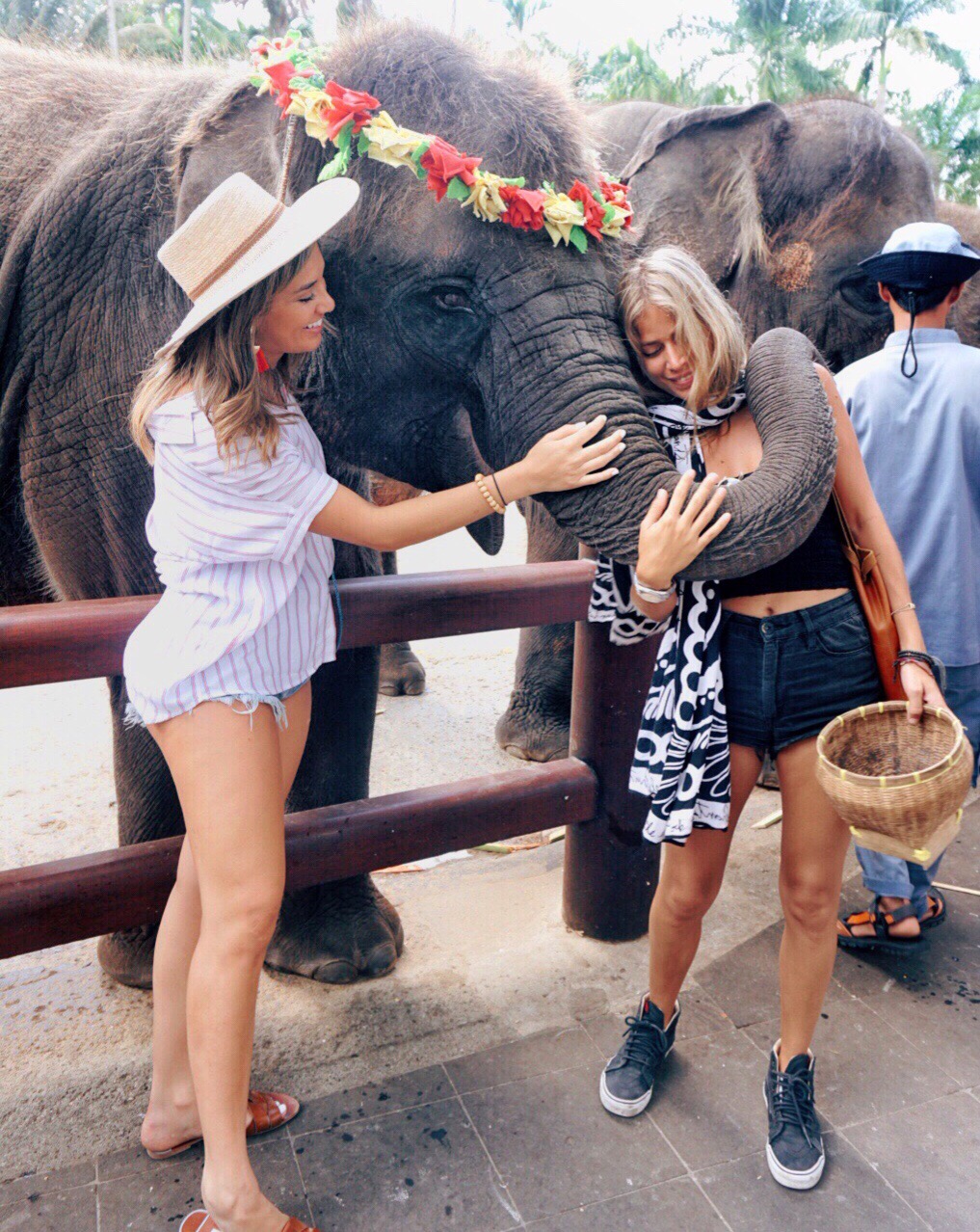 However, because we were a bit skeptical about the seats they put on the elephant's back, we decided not to ride them until we have more information about the effects they have on the elephants, so we just got the general entry this time around (which includes feeding the elephants) but it was sooooo much fun regardless.

(My friends and I opted for just feeding them, but if you want to ride on them when you go visit, there is a "Safari" Package you can buy at the entrance for $100).

It's no wonder why they're called gentle giants - the way they walk, how they play... it's simply mesmerizing.

A few days later, we went for lunch to Kynd Community. To be honest, it doesn't matter what you get on the menu because EVERYTHING is delicious. It was definitely an unexpectedly GREAT lunch!

To sum up my trip, I fell in love. After spending two weeks in this island, my heart was aching to leave all the good people and beautiful memories behind. I cried on the way to the airport promising my heart that my departure would only be temporary and I will come back soon, to stay for ever.

On our way back home from Ubud, we stopped for a moment to admire the Balinese workers and I saw this woman from a distance. She turned around, saw us, and confused about our presence, the she walked up to us.

She said something I could not understand, but then the unknown woman, whom I could not communicate with, simply held my hand and smiled. I held hers and smiled back.

To me, it was an act of love. This precise moment represents what Bali is all about and what it means to me. It's Love. The purest, most innocent, prettiest kind of all. 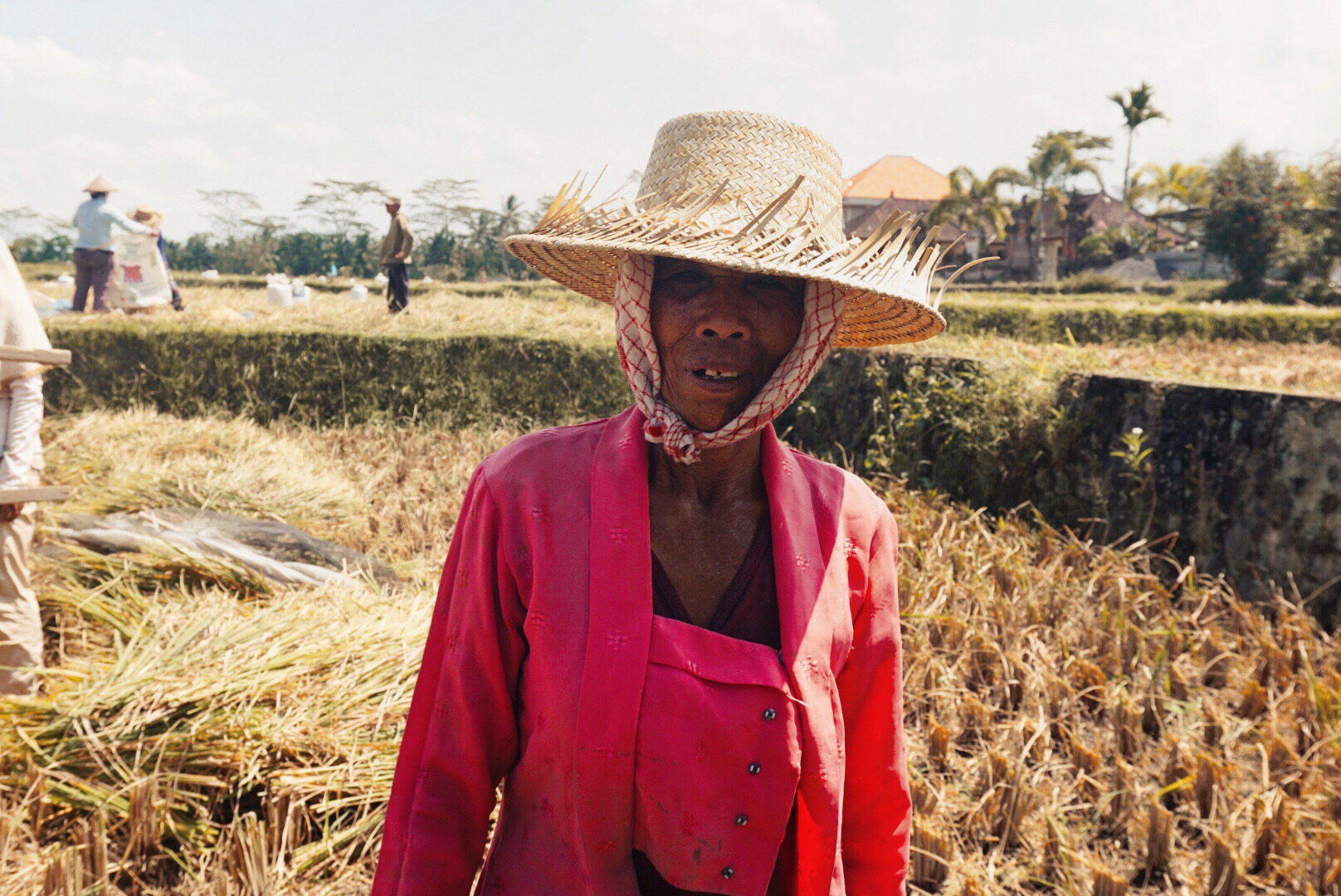 What It Means To Be "Earth-Friendly"